The Temple of Elemental Evil

Updated Dec. 6 It's been a while since I last had something to write. Part of that is because I've been busy in a few new games. One of those is a campaign that is taking us through a very old module for D&D, The Temple of Elemental Evil. We're not even halfway through the Temple and our party has already suffered major losses and replacements within the party. I've been taking advantage of the shear scope of this dungeon to slowly improve my minuscule Lightwave Modeling skills. The GM has been nice enough to allow me to use what I draw in Lightwave in the game as a map in my character's head. So far I've gotten the floor plan down for the main floor and the sub-floors have been expanded slowly as the group has moved through the various parts of the dungeon. The height between the floors isn't well known from the descriptions read aloud from the module, so the separations are just current best guesses to make the various discovered stairways line up. The stairs were created using LWCAD for the straight steps and plugin that I found that does spiral staircases, MK ScalaChiocciola. Once I have more of the whole dungeon mapped out I'll start adding walls and other details to help flesh out the look and feel of the dungeon (walls, torches, etc...).The party has continued to explore the dungeon and I've added the new extensions to the various sections. The biggest problem is getting stairways that make sense between the floors to fit. So far, most of the stairways are very steep or oddly designed. The odd designed ones were drawn on the paper map to fill a square grid, but wrap around. It is easier to just draw them using the MK ScalaChiocciola plugin as a spiral stairway. I could probably make them square again by pulling those points of the outer edge until they line up with the grid, but why bother, heheh. We recently completed the Temple of Elemental Evil module, so I've taken the liberty of using the full maps and area descriptions from the file directly. There are still some oddities to fix between the levels as well as what the outside of the Temple actually looks like. I've found some 3D models for the outer temple in the Sketchup 3D Warehouse. Boy did that need a lot of cleaning up to make it fully useful in Lightwave. I now know what the corridors are shaped like thanks to an image in the module that wasn't shared with the party while adventuring. Since I've been working on this on several different computers, I thought it would be easier to manage by using a repository. So, I've started putting my stuff up on GitHub. So far this has helped to not only allow me to keep working no matter what system I'm at, but provides me with a good backup should my local file get corrupted again. 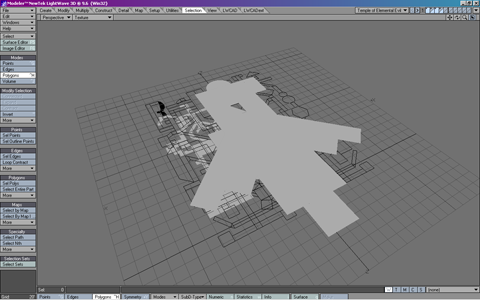 The four levels stacked on top of each other. 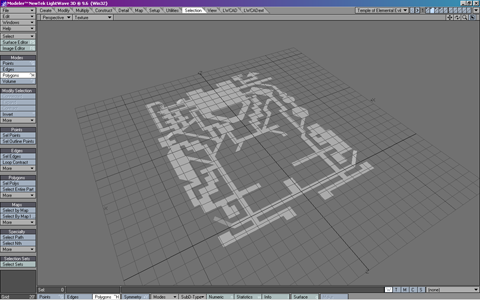 The first dungeon level. The Temple of Elemental Earth 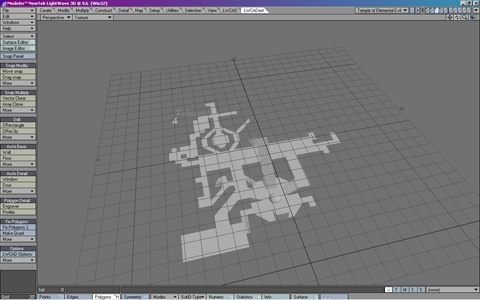 The second dungeon level. The Temples of Water and Air 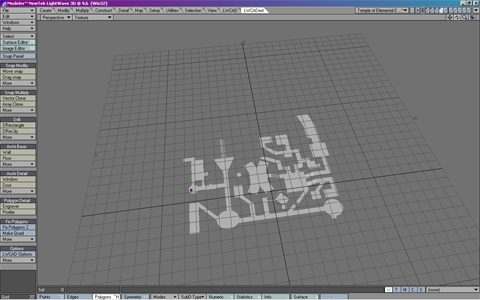 The beginnings of the third level of the dungeon. The Temple of Elemental Fire. This has been expanded a bit as more exploration has occurred each weekend. A new set of stairs had been found reconnecting to the previous level.I've continued to slowly add more details to the Temple and started working on a few other minor things as we completed this adventure some months ago. Reading through the adventure as written has helped me to better visualize just what it was that our group was walking through and just how much stuff we never encountered.I initially created a single roof that was gabled and peaked once over each of the main section and wings of the Upper Temple, but after reviewing the original cover art for the module I realized what the author meant by an "Oddly peaked and gabled roof" and have switched to working on that instead. 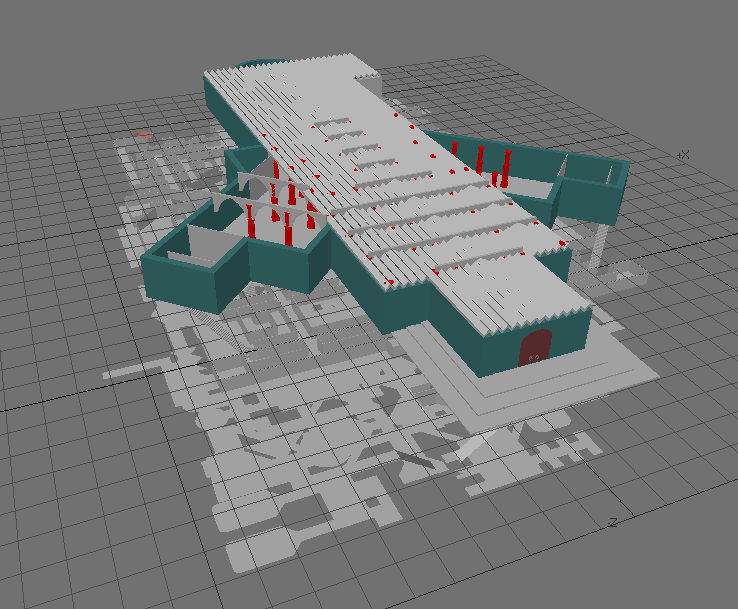 I've got the whole upper structure now covered by the peaked and gabled roof and even got about half of the interior structure covered so that it has a very nice look when the camera moves inside of the upper level. Unfortunately the columns in the first half of the temple don't make for a nice clean lineup with both wings and the far end of the temple. So, decision time as to whether I should follow the "plans" as drawn or deviate to make the structure work better.I've also updated my software to newer versions of both LWCad and Newtek's Lightwave. New tools might help, but given that I don't have a real good feel for the software anyways, I have yet to develop a good workflow to speed up creation of models. Maybe I should spend some time participating in the various biweekly challenges from the Newtek forums.I ended up not keeping to the drawing as setup by the original map. The columns were all moved and adjusted to better work with the overall flow from front to back of the Temple. Thanks to this I have been able to place in vaulted ceilings that line up completely. The only major oddity was when I went to go down the 45 degree hallways as the arch had to use a different profile to line them both up.

The gaps visible in the image are because I haven't created the archways between the different vaulted sections. I'm debating how much the profile of the arch should be decorated rather than just putting in place a simple, flat arch.Even with what time I've currently put into the project the whole temple still isn't even 60,000 polygons in size and once done will still need a lot of work to texture the various surfaces. Unfortunately I'm not an artist, so some of the imagery of the Temple will be a little hard to make possible (especially since it is barely described in the module and just left to the player's imagination).