I've been trying to follow the goings on in the RPG world with the Star Wars license. In early 2010, Wizards of the Coast (WotC) gave up the license to the Star Wars merchandising that they had been doing for several years (D20 RPG, Miniatures, etc...). By the end of that year no more of WotC's Star Wars RPG or Miniature products were to be found on shelves.

Last year around this time (August 2011) Fantasy Flight Games announced that they had acquired the license and had great things coming for it. The first item shown from their pipeline was the Star Wars X-Wing Miniatures game that appears to be a variant on the Wings of War, a World War I and II aircraft dueling game. So far neither the game nor any of its expansions have hit the shelves of game stores, so I haven't had a chance to try it out or see what the quality of the 3D miniatures on the stands or how the game play actually works.

A new item that should be coming out (my FLGS says that it has gone to distributors and should be available by the end of next week) is Star Wars: Edge of the Empire (Beta). This isn't the completed game, hence the Beta, but is supposed to be the playtested rules without any of the artwork. The Beta is a 4 pack of the rules along with 20 character sheets for each bundle that is ordered by a retailer. They are looking for feedback from a larger group of players on the new game before they go into final production.

Once again, the setting is returning to the time of the Rebellion Era, the time of the first three movies, bringing back the Black, White and Shades of Grey that existed in this time of turmoil and trouble for the galaxy. The Rebellion Era is also the time covered during West End Games D6 Star Wars RPG since it was produced when those were the only movies (1987-1997) and source material that existed (until Timothy Zahn's Heir to the Empire series revitalized interest in the setting).

From what I've been able to find on their site the new game is based on a new set of mechanics. Gone are the Class/Levels and use of lots of different polyhedron dice of the D20, D20 Revised and D20 Saga editions of Star Wars from WotC. Gone are the large pools of dice added together of the days of the West End Games D6 Star Wars. Instead, the base mechanic of the system is a collection of 3 positive types of dice (Ability, Proficiency, and Boost) and 3 negative types of dice (Difficulty, Challenge, and Setback) that are pooled and rolled to accomplish the task at hand for the player.

This sounds like a variation on the dice used for games like Warhammer Fantasy RPG 3rd Edition or the Descent board game. Since the dice aren't ready yet, either proxies for the dice will be needed or, if you have a smartphone or tablet (iOS or Android), a downloadable app that can be purchased for $4.99. I believe the cost for the program has to do with the Star Wars licensing of images and sounds else it would be a free app. 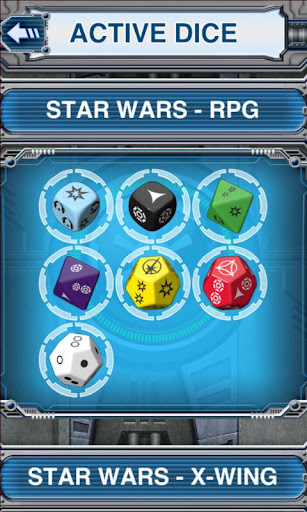 This is supposed to be just the first of three "Epic" installments. Each installment is supposed to be a standalone core rulebook, but also usable together once all are released. Edge of Rebellion deals with the Scum, Villainy and Scoundrels of the Galaxy in the Outer Rim (Bounty Hunters, Smugglers, etc...). Age of Rebellion covers the aspects of playing a Rebel fighting the Empire and its minions. The Final installment will be Force and Destiny, where players take on the roles of the last Jedi alive during the time after the Empire's rise.

I'm hoping to get my hands on the rules and then post a review of them as soon after as I can.